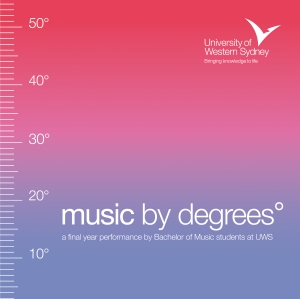 This essay will detail the creation of the Music By Degrees production by Tutorial Group One of the Music Project unit, and will provide insight into the design of the project, by documenting the processes involved in the projects conception and realisation.

Music By Degrees began with a relatively straightforward premise: to portray aspects of learning outcomes from the Bachelor of Music degree itself in a live performance setting. The projects outline and its evolution was in some respect predetermined: once each subgroup had decided upon the aspect of the course they wished to portray, it was only a matter of negotiating the creative processes required to bring about a cohesive performance. Initial meetings were productive, if haphazard – the first get together on August 15 consisted of only thirteen students out of nearly thirty. However, a concept soon began to emerge, perhaps out of necessity than any real sense of originality. The idea to represent the learning outcomes as individual vignettes, combined into an hour-long production, at first glance seemed simplistic. However, it became apparent that this would be a great vehicle for students to showcase what they had learned, and to promote the degree to a wider audience, especially future students. It was also suggested that the university television unit TVS could be involved, and possibilities began to emerge for promotion of the production.

It was decided that five of the subgroups would directly portray course units, with a sixth group taking on the dual role of portraying the ‘skills we came in with’ and ‘what we came out with’. The subgroups were as follows (in order of performance):

Once these had been decided upon, each group worked individually on their respective projects, which in hindsight perhaps lacked oversight, as each group interpreted their ‘brief’ differently and in some cases without a conception of the overarching project (for example, an agreement that each section link via a ‘drone’ note; more on this later). However, it also allowed for idiosyncratic performances to occur, and in this respect was conducive to a more varied performance than one might expect in a large production.

Subgroup 6
As a member of Subgroup 6, our task was to create a ten minute soundscape drawing on techniques learnt through the Sound Synthesis and the Sound Environment unit, and it soon emerged that key personnel in this particular subgroup were well suited to the task. Alex Salazar was enthusiastic about using Ableton Live in performance, as was Ben Turner. Blaise Parnell, although a pop guitarist, had ideas about extended acoustic guitar techniques, and Tom Hodson, a classically trained pianist, also had some techniques for piano. Drawing on my background of creating soundscapes, informed by my interest in 1960s psychedelia, the group appeared to have potential. We arranged to meet at a regular time each week following lectures, and set up a Facebook online group to facilitate communication between members.

An initial meeting on August 22 was mainly concerned with organisation and planning. I had suggested using audio samples from the UWS environment would be a good start, and ventured a number of recordings I had already made in first year; to my mind, the soundscape would need to relate to our learning environment. Ben was also keen to incorporate a ‘journey’ to UWS, using the sound of a boiling kettle and other domestic sounds. Tom at this stage was experimenting musically, and to his credit was already thinking of an overall structure, proposing a basis for the soundscape that loosely related to sonata form. Alex was eager to start recording, and Blaise, although enthusiastic, was at a loss for ideas, though this would soon change. We resolved that a Dropbox would be necessary to swap audio files, and agreed to contribute samples to this during the week.

The following week (August 29), the group met in the small recording studio in O block to record ideas, which was perhaps premature: this was at Alex’s insistence, and resulted in much time being spent setting up microphones to discover that we were unable to use headphones. In the time we had left, we recorded a musical idea of Tom’s which superimposed a 6/8 motif against 5/8 on piano in C# dorian, which would relate to the previous groups drone ‘link’ in E; this proved to be a bedrock for the final soundscape, and once sampled provided a signature ‘motif’ that we would return to (Figure 1):

My role at this stage was providing percussion, though it soon became apparent that my strengths as a guitarist were more suited to providing atmospherics, especially in the use of extended techniques and effects – more on this later.

The session of September 5 proved to be useful in terms of planning, especially as Tom sketched out his ideas for a structure (see Figure 2.)

Ben had brought a portable digital recorder, which proved invaluable for capturing the evocative piano motifs that we would use in the final soundscape. At this session I decided that my role would be better suited to guitar atmospherics, as my percussion attempts had been too metrical; it was apparent that we needed to work with sound, rather than music per se. As it turned out, Tom would adopt the percussion role successfully in later sessions, and Blaise by this stage was experimenting with guitar body percussion, so in this respect my percussion duties were becoming redundant.

By September 13, the instrumental lineup for the final performance had solidified. Ben was using Ableton, providing atmospheres taken from the UWS environment, with Alex also employing the software in conjunction with a ‘Push’ software controller to provide ‘musical’ textures. Blaise’s extended techniques on acoustic guitar included open tunings and body percussion, and Tom, freed of the piano, utilised a violin bow on vibraphone and cymbals. I used analog delay to create feedback loops, in conjunction with extended guitar techniques, including a bottleneck slide employed in a technique borrowed from David Gilmour of Pink Floyd to create high, eerie sounds, such as that used on Echoes (Riis, 2013) – this also worked with the bowed techniques Tom was employing. This was easily our most successful session to date, and clearly we were gaining inspiration from the sounds we were creating; from this point it was only a matter of structuring the piece.

The next meeting on September 20 provided an opportunity to map out the overall structure and devise a preliminary score. An A/B/C structure was formulated, based loosely on the exposition/development/recapitulation structure of sonata form, in the mode of C# dorian. The A section would emerge softly, with gentle piano, volume swells and acoustic guitar harmonics, gradually gaining in dynamics and transitioning through a dramatic A minor section, before returning to C# minor. Upon entering the B section, Blaise would swap to hammered motifs on guitar, Tom to percussion with myself creating echo loops, the piece gaining in intensity, finally peaking at fff with a climax of feedback loops, crashing cymbals and furious drumming. It would then subside into a C section, moving to the ‘bowed’ slide technique, Tom utilising bowed vibraphone and cymbal with Blaise retreating to softly picked notes, with the recurrent sampled piano motifs from Ben and Alex still apparent. (Fig 3.)

By the following session on September 26, I had reorganised the rough diagram to resemble something more like a graphical score (Fig 4.):

Our presentation the following week of October 3, was performed convincingly. By this point I was also thinking in terms of the entire project, and had devised the Music By Degrees brand, playing on the pun in the title as representative of temperature, from the ‘cool’ beginnings of the course to its ‘red hot’ conclusion. This also tied into a line of thought I had been investigating about timbral colour and the verticality of sound for my hours year, in line with Eric Tamm’s observations of Brian Eno, in that “you could mess with time – storing it and then distorting it any way you wanted.” (Tamm, 41).

It was decided that the following week of October 12 would be devoted to recording the soundscape as a document of our efforts, and we booked the small studio in Building O to put down a multitrack recording, which I mixed that evening. I was also the designer of the program for Music By Degrees for the performance the following week on October 17, so was becoming pushed for time, and felt some preparations for the final production were compromised as a result.

Conclusion
In hindsight, I believe some aspects of the processes for Music By Degrees were flawed, and as a designated ‘leader’ for the group (along with Jake Harris) felt partly responsible for not overseeing more of the project than I would have liked. For example, once themes for each subgroup had been decided, students were left to their own devices with the barest knowledge of what each was devising – although this created variety throughout the project, I perceived that it also contributed to a lack of cohesiveness throughout. The idea of using ‘drones’ as a linking device between group performances was abandoned by most groups, with each failed to inform the other that this would occur: hence by the final performance on October 17, there was no formal transition between individual performances, resulting in last minute recordings of synthesizer ‘washes’ to link acts. In retrospect, I believe Jake and myself could have delegated responsibility to other members, but given time constraints and the amount of work required in other units, I believe we achieved the best possible outcome in the time given, and I am justifiably proud of the result.